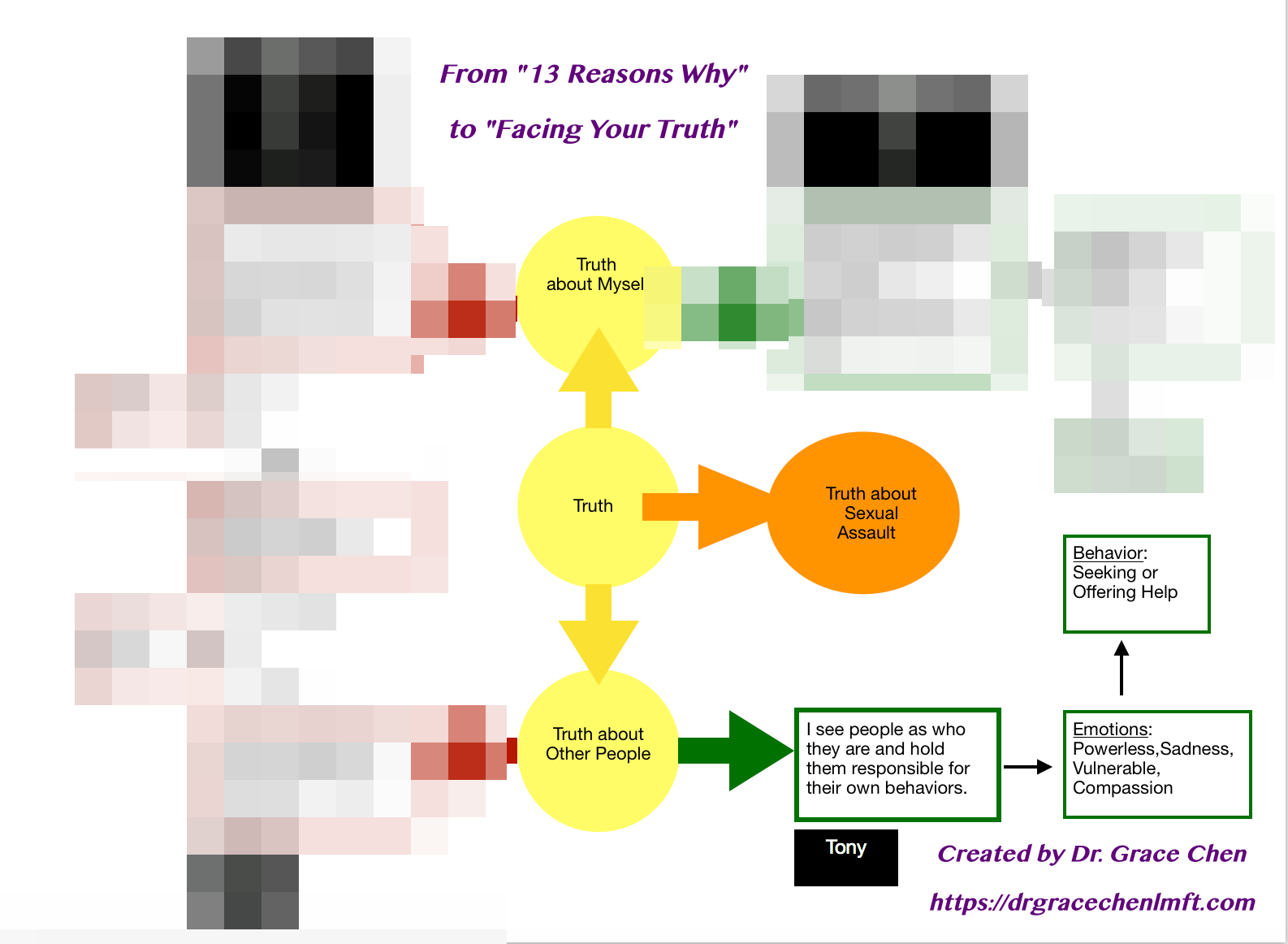 “Sometimes things just happened to you. It just happened. You can’t help it. But it’s what you do next counts, not what happened but what you decided to do about it.”
~ Hannah Baker, EP 10

Yes, we can’t control things that happened to us. If I had learned something from being a therapist, that is: “bad things happened to good people and we, as human beings, are very powerless in control the “outcome” of our efforts.” Many people, including myself, have a difficult time to accept the outcome that is not what we desired. Or, we have a difficult time to allow things that are out of our control.

The only thing we have control is what we do after the bad stuff happened. Throughout the years of being a therapist, I have learned this: we may not have the choices of the desired outcome. When the result is not what we want, we still have the option to process the loss that undesirable outcome. Many times, people want to rationalize “what happened” as if the understanding would make us “feel better.” However, the difference between “the desired outcome” and the “actual outcome” already bring out the emotional disturbance that requires our attention to transform those emotions.

Throughout each episode, I also see some character gradually transform from self-judgment to compassion such as Clay Jensen. At the beginning of the series, Clay Jensen feels guilty, like everyone, who thought he did something that caused Hannah’s death. I watched him resisted to listen to the tapes, sunk into anger and depression while listened to the recordings, and experienced tremendous fear when heard the section of his tapes. However, throughout the series, with the help from his friend Alex, he found the courage to transform his guilt, fear, anger, and sadness. He faces himself who is scared to express his admiration to Hannah and angry at his friend Jeff’s dying due to alcohol. However, as he gradually meets himself, I witnessed a strength started to grow inside of him. He found his compassion for Jessica and another loner Skye by reaching out to her.

How does Clay transform himself? First, instead of judging himself and be angry, he learns to face his anger to sadness, and it transform into compassion.

This paragraph from Alex to Clay about sadness and anger expressed it well.

“Alex: Yeah, but I mean, aren’t you sad?
Clay: More pissed off.
Alex: You know, I think you can be both. I mean, like right now, maybe it’s easier being mad at him (meant Jeff) than being sad…..But I also think that maybe someday you might feel worse if all you were today was mad, you know what I mean? ….Sometimes you judge people I mean, we all do. Sometimes you just live to regret it.”
~ Alex Standall & Clay Jensen, EP 10

We all judge people, including ourselves. When we place the judgment, we get angry at ourselves and other people. When anger is towards ourselves, it leads to powerless and hopeless. Therefore, some people chose not to see the truth about oneself such as Courtney and some people prefer not to know the truth about others, such as Jessica. However, when we can start to feel the sadness of the judgment, it might lead to compassion.

When Clay allowed himself to see through his anger towards Jeff (The truth about oneself), he can see the truth about Jeff, the friend who died due to Sheri’s knocking down the stop sign (The truth about other). Then, he comes up an action plan by talking to Sheri and Jeff’s parents.

Second, this segment from Hannah to Clay also expressed another difference between becoming powerless and hopeless vs. accepting your vulnerability.

“Part of me was saying “Please don’t leave.” Part of me never wanted to see you again…..But you walked out the door like I told you to…..Why did you have to leave? It was the worst thing ever.”
~ Hannah Baker, EP 11
vs.
“She just let everyone intimated her over and over until she disappeared. I am not going to give up.”
~ Clay Jensen, EP 9.

In this segment, Hannah pushed away what she truly wanted, which is to be vulnerable in front of Clay. She became angry and drove Clay away. I have very mixed feelings about citing this segment. I understand that Hannah has been bullied and people around her have let her down when she said “NO.” For example, she refused Ryan’s invitation to publish her poem. However, Ryan refused to listen to her wishes. It is understandable that Hannah didn’t believe that Clay would listen to him. However, Clay, who can face himself and never has the needs to uphold a specific image, actually listened to her wishes.

On the other hand, Clay, after facing his imperfection, starts to take action. In the end, Clay can allow himself to face the things he was ashamed of himself, such as the death of his friend Jeff and Hannah. At the end of episode 13, he reached out to Skye, and when Skye asked him if he was OK, he told her honestly that he was not OK and he needed to talk.

In summary, accepting your truth self-requires a lot of courage. No matter you judge yourself or not, when facing yourself, you might feel shame, anger, sadness, powerless, and hopeless feelings. However, when you can face the shame, leave the judgment, face your sadness instead of anger, and allow yourself to be vulnerable about your needs, you can transform yourself from helpless and hopeless to compassion towards yourself and others.

This exercise might elicit different feelings that “feels like” hard to tolerate. If it brings up a lot of emotions that are hard to tolerate, talk to a friend or seek professional help. You might be on the verge to reconcile a very difficult memory or traumatic event. Don’t bury it away. On the other side of the fear is your courageous inner strength that is waiting for you to dig out.

From “13 Reasons Why” To “Facing Your Truth” — Prologue

From “13 Reasons Why” to “Facing Your Truth” — Epilogue