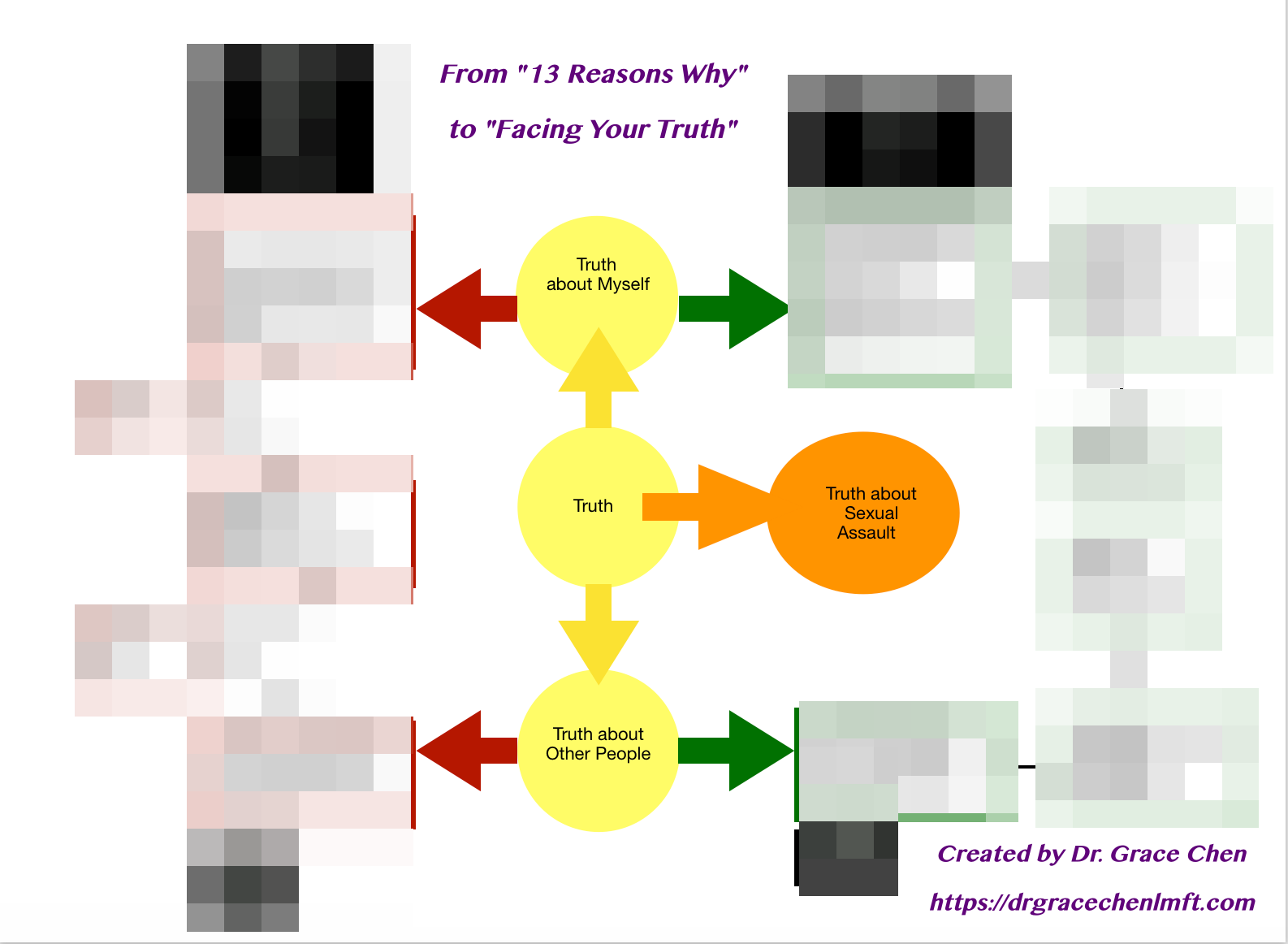 (Please Read “Facing the Truth about Rape Part I” first.)

Reaction 2: “If it truly happened, why didn’t she do something to stop it?”
“You might say I should have done more. At that moment I was already dead.”
~ Hannah Baker, Ep 12

Hannah said this after Bryce raped her. Her reaction was typical victim’s reaction: frozen. She also was frozen when she witnessed Bryce raped Jessica. So, before we question the victims “not doing more,” the reality is they can’t because their mind and body are in a status of shock and frozen to do more.

More so, we know that many victims lost their lives because of fighting against the perpetrators. At that moment, it’s either fight and possibly lose your life or let the perpetrator hurt you. So, are we blaming the victims who fought to survive for not fighting the rape?

How about the perpetrators? Shouldn’t they know that they shouldn’t have violated anyone’s boundary from the beginning? Why do we assume the victims have the responsibility to say no or to protect themselves but not asking the perpetrator to respect the victim’s boundary?

The perpetrators like Bryce in the movie who can’t seem to see his behaviors were wrong. He even rationalized his sexual assault as the victims begged him to do it. Somehow, in his mind, he bears no responsibility for the consent of the intimate exchange.

Reaction 3: “Unless you want to take legal action, there is nothing can be done.”
“Mr. Potter: If you can’t give me a name if you don’t want to press charges against this boy if you’re not even sure you can press charges then there really is only one option.
Hannah: What is it?
Mr. Potter: I’m not trying to be blunt here, Hannah, but you can move on.
Hannah: You mean do nothing.
Mr. Potter: Is he in your class?
Hannah: He’s a senior.
Mr. Potter: That means he’ll be gone in a few months.
Hannah: Are you fucking kidding me? It can be very dangerous to accuse someone of a crime like that.
Mr. PotteR: Look, something happened, Hannah. And I believe you. But if you won’t confront him then the only other choice is to move on.
Hannah: Yeah. That’s just what I’m going to have to do. Thank you, Mr. Porter.”
(Mr.Potter, EP 13)

There is no easy way to handle the situation when the clients told you he/she was raped. When I was watching this segment, I had so many feelings running through my head.
Legally, if Hannah didn’t want to press the charge, there is nothing can be done, LEGALLY.

However, is that true that nothing can be done? No, that’s not true. Hannah is very scared and worried to be around Bryce when Mr. Potter made a comment that “a senior (meant Bryce) will be gone in a few months.” For a victim, they want to know they are safe and protected no matter they file or not file the legal action. If they do not feel safe and protected, their immediate reaction is to retreat and to avoid any conflict.

In the past, I have heard about survivors of the military sexual trauma talked about how scared they were when they had to go to their duty station every day after the sexual assault was reported. They had nowhere to turn, and their fellow service members and their chain of command all questioned them: “why do you want to do this to your fellow service member?” They expressed the fear of being challenged and doubted and unable to avoid the interaction with the perpetrators brought so much anxiety and fear, but they had no place to run.

I also remembered some of the adult survivors of the childhood sexual abuse told me how their non-perpetrating parent made them feel: “you caused our family to break up.” They felt as if they did something wrong by telling the truth to the other adults outside the family. So, even though the sexual abuse stopped because the perpetrator was removed from the home, they continued to be seen as the “troublemaker” who broke up the family.

This segment about Hannah made me think about those previous clients. Therefore, if I were the guidance counselor, I will first communicate to Hannah that my office will always be a haven for her. If you have a survivor confide in you about the sexual assault and you know the perpetrator is around, your most significant help would be to let her know you can be her safe place.

If I were the guidance counselor, I would also communicate to Hannah that I have “duty to protect: and “duty to warn,” However, we have to go through this process together. I will emphasize that “you are not the one in trouble even though it feels that way.” I will also emphasize that “you are a minor and we, as adults, will be the one to take this burden away from you.” The legal process might make her feel she is the one in trouble, but she is not. As an adult, it is our responsibility to make sure the children going through the process protected, and whoever questioned the victims, it is our responsibility to also clarify the myth.

Our first step is to help her feel safe when she is in school or at home, especially when she is at the place where the perpetrator is around. Then, we will have to talk about what’s her next step. No matter she decided to press charges or not, there is always something a counselor can help other than “moving on.” Many victims cannot take the stand to file for the legal actions because we don’t make them believe that we believe their stories and we will be with them along the way. The process of figuring out what she wants to do can take a while already. When the client feels that he/she is locked into a “yer or no” situation, that’s they often feel trapped.

Hannah is a minor. In different states, the requirement for the counselors to report might be different. I will be sure to check on that. We might need to bring her parents in and to sort out the next step together because she is a minor and she shouldn’t have to take on this decision by herself. However, the main point is to be sure that Hannah knows that she is not in trouble, and she is not the one to be blamed for Bryce’ crime.

Takeaway Points:
1. People lie to get out of trouble, not to get themselves in one. Lie about rape only get the victims more troubles.
2. When encounter rape, most people do not know how to respond. Instead of being there for the victims, we push those feelings on the victims by questioning whether the rape happened.
3. The perpetrators and the “innocent bystanders” should both evaluate their values and viewpoints regarding the power and control of sex.

4. There are more you can do for the victim than filing legal charges. If you don’t know what you can do, ask the victim: “What can I do to make you feel safe?”

Reflection Exercise:
I hope that you have gained some clarification about yourself through the reflection exercises we did in the past articles. At the end of this series, I invited you to evaluate your own belief about rape by going through this list. If you agree with the statement, please go back to the previous reflection exercise on “I refuse to see it’ to clarify which part of you that you do not want to face yourself.

Links for the Self Reflection:

Myth and Facts about Rape

“What Does A Perpetrator Look Like?” — Myth about Sexual Abuse

“Who Caused the Trouble?” — Myth about Sexual Abuse (II)

This exercise might elicit different feelings that “feels like” hard to tolerate. If it brings up a lot of emotions that are hard to tolerate, talk to a friend or seek professional help. You might be on the verge to reconcile a very difficult memory or traumatic event. Don’t bury it away. On the other side of the fear is your courageous inner strength that is waiting for you to dig out.

From “13 Reasons Why” To “Facing Your Truth” — Prologue

“What Does A Perpetrator Look Like?” — Myth about Sexual Abuse

“Who Caused the Trouble?” — Myth about Sexual Abuse (II)